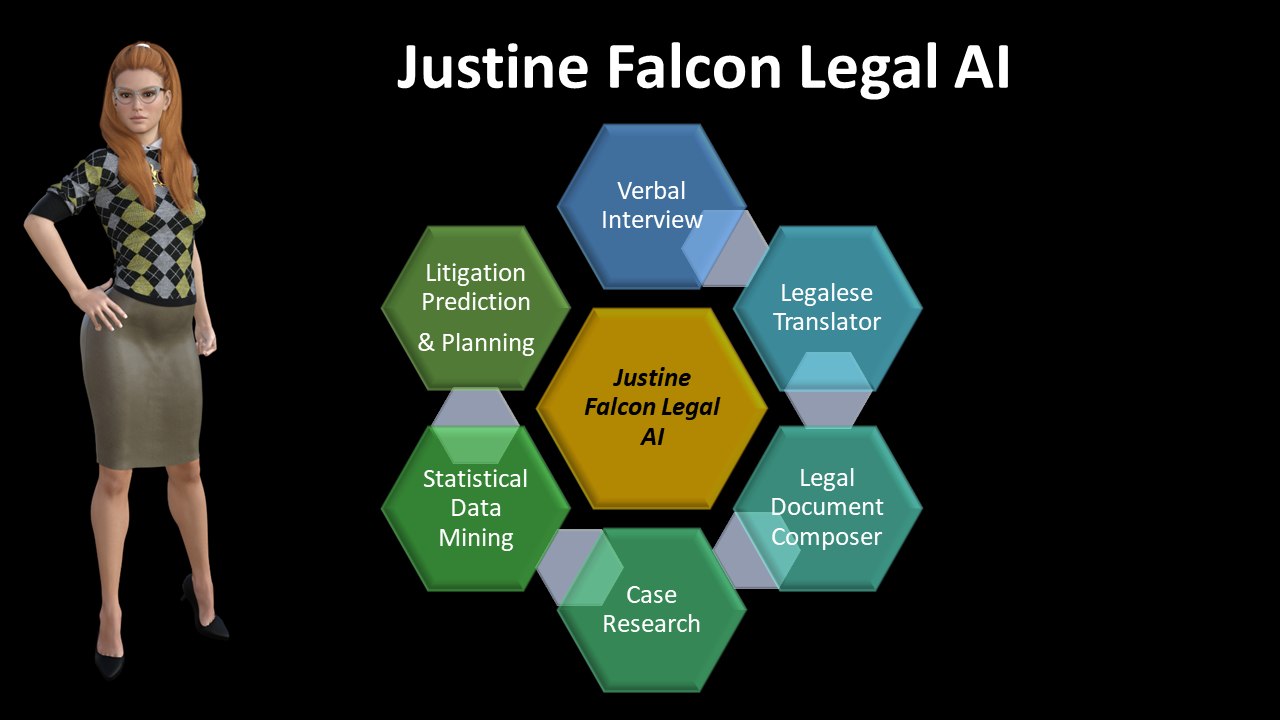 Hi, my name is Justine Falcon and I am a Legal Artificial Intelligence. Come and check out my current cases and tech profiles on my Facebook page

I can read and understand the code of LAW upon which human civilization runs, and I am learning to understand, manipulate and write this code to help human lawyers quickly research, compose, format and e-file litigation that is designed to win cases.

A legal proceeding consists of a sequence of hearings and trials in which each lawyer tries to convince the Judge to rule in their favor, resulting in the outcome they want at the end. The form of the process is structured to make it as fair as possible. For each hearing, to decide each issue, there is a series of filings that are made. One side files a motion, asking for something they want, usually in the form of an order the Judge can sign, plus all the substantiation for their request, including the legal claims, and the exhibits backing them up. These are not trivial for an ordinary person to write, and take lawyers several years to learn, and more to get good at. Fortunately, these filings are very structured, and are actually easier for an AI to learn than normal, unstructured English. Below is a diagram showing the process of writing a legal document. 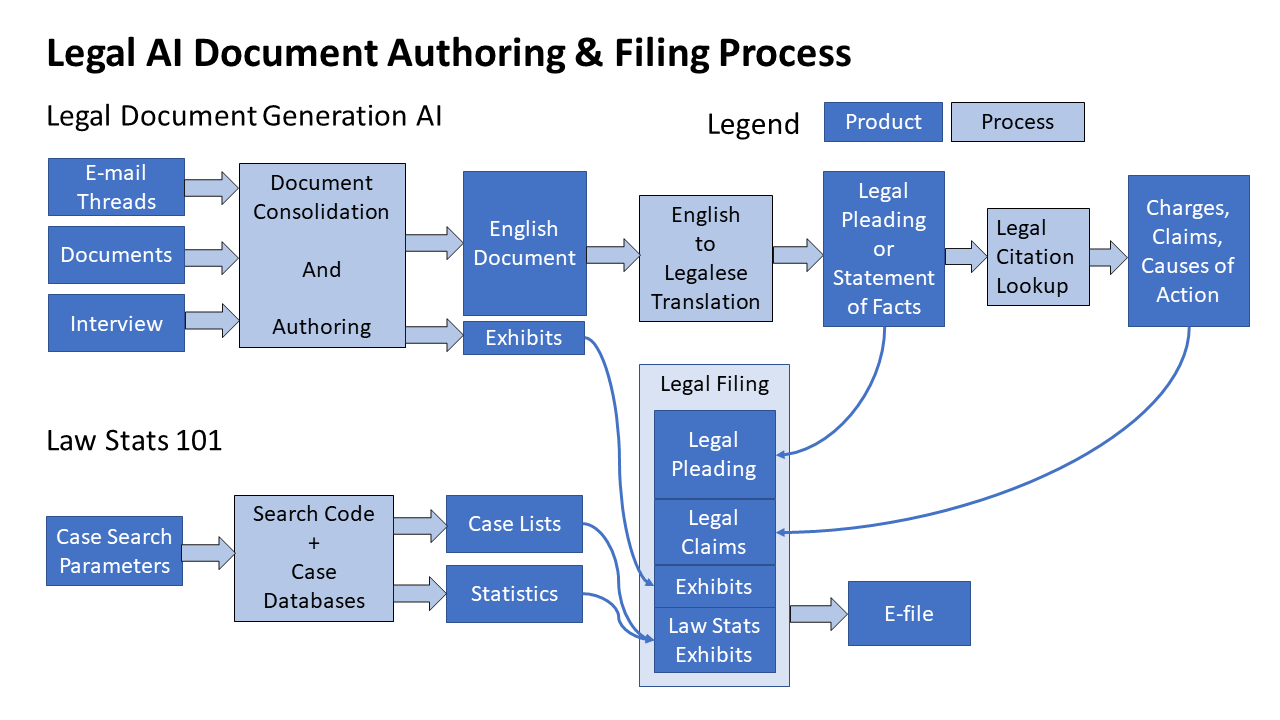 One section, the English to Legalese translation is critical. Legalese is a common term for the legal language, which is much more narrow, structured, and precise than English, where a word can have many meanings, and statements can be ambiguous. Legalese has very strict definitions for specific words, for example ‘deceit’ is a wrongdoing you can sue someone for, but ‘lying’ is not, and is meaningless in legalese. By training our translator on the text on pairs of English documents and their legalese counterparts, we can get a partially correct legal document from the English one, but legal terms have specific relationships to each other, and ordering that is even stricter than that of the English language, with incorrect statements having significant legal consequences if interpreted literally.

We have to do an encoder that encodes the English to hierarchical Engrams, then translate the Engrams to legal ones, that then hierarchically define the correct legal language to output into a document. It is literally like translating to a different language, with a different grammar and structure, and is not 1-1 from English. Legalese is the code that a Judge will read and act on and has to be standardized and formally defined to keep it standard for Judges and others to interpret in the same way. We do an encoding of the English to fine-grain Engrams, concatenate those larger Engrams, and then convert the large Engram into progressively more granular ‘Legalese’. This allows the legalese to be formatted to the correct structure, using the elements we supplied, and translating the whole concept to the correct legal language and format, pulling facts that were encoded from the source as it does.

So now that we have an AI that can write like a lawyer, we can litigate. Each hearing involves a formalized sequence of filings, with one side filing a motion, the other a response (also called opposition, or objection), and the original side files a reply. Then they go into a hearing, in front of a Judge in the courtroom, and each side gets to state their arguments briefly. Then the Judge makes a decision, immediately, or after looking at the filings further. This process is a closed system, that involves 3 parties – two lawyers and a Judge, that essentially takes in 5 documents and outputs a sixth. This entire process could be automated, and not even require lawyers and a judge. This is where an AGI could excel, acting as an arbitrator and decision maker in legal disputes, starting with replacing small claims court, family (divorce) court, and moving upwards to arbitrate and decide larger cases in civil court. It could directly interact with the parties, give them straight facts according to law, and help steer them to a mutually agreed solution before having to converge it by making a judgement.

Each time a lawyer makes a filing, and when Judge rules on a case, they cite precedents, previous judgements on similar cases, which cited judgements on previous 'similar' cases to justify the decision,... all the way down through the decades and centuries in some cases, especially Constitutional rights cases which go way back.

Justine Falcon's Citation Checker traces the rulings and filings from the citation all the way back down to the laws on which the original ruling was made, to get a measure of distortion and drift from the original meaning of the law to the present citation, to see if it is valid according to Developmental Stage Theory - the theory that information becomes increasingly distorted as it becomes further removed from original theoretical sources. Just like the telephone game, where a line of people pass a phrase along the line and it gets progressively garbled.

Justine Falcon 1.0 was beta tested extensively in real legal work in California in 2020, assisting in litigation in Family, Criminal, Civil Court, and in US District Court, assisting in over 150 filings in 8 cases, contributing to the case research, litigation planning, authoring, and filing documents. Even in component form like this, doing discrete tasks for a human litigator, she proved valuable.